Cisco-Polytechnique "Internet of Everything" > Chaire Cisco > Welcome to Polytechnique, Juan-Antonio! 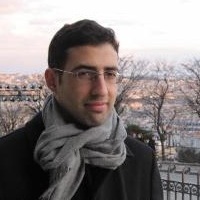 Juan Antonio Cordero Fuertes is joining Ecole Polytechnique as a research assistant professor today, on September 1, 2016 – and is, as such, joining my research group. Or, more accurately, is “re-joining” my research group: years ago he did his Masters with me, and then continued doing his PhD with two of my good friends Philippe Jacquet (who at the time was with INRIA, but since was lured by the siren calls from industry and now is with Nokia-BellLabs), and Emmanuel Baccelli (who was then, and still is, with INRIA).

Juan originally hails from Barcelona in Spain ?? where he did his “Licenciatura” in mathematics, then a masters in telecommunications engineering. The subject of his Masters thesis was “adopting classics routing protocols to the challenging environments of MANETs” – specifically, he participated in development of an adaptation of OSPF for MANETs which subsequently was standardized by the IETF.

Juan continued on some ideas from his Masters thesis during his PhD, notably generalizing the notion (& modeling and analysis) of overlay networks as a way of operating compound (wired/wireless) autonomous systems in the Internet – his manuscript is even on-line and is a really interesting read.

On obtaining his PhD, Juan went to UC Louvain to do a post.doc with Olivier Bonaventure (also known as “Mr. Multipath-TCP“), where he worked for a couple of years on various internet measurement tools, applications, and platforms (notably, for OpenWRT) for assessing the potential benefits of (surprise…!) Multipath-TCP for dual-homed end devices. After this stint in Belgium Juan went to the Hong Kong Polytechnic University for another couple of years of post.doc where he dove a bit into Information-Centric Networking (ICN), by way of looking to intelligent placement of data in “the cloud”. Hong Kong added some SDN to the mix of his interests, also.

And now, we’re thrilled that he’s coming back to Ecole Polytechnique. A mathematician who understands protocols, and who can code rather well, is a great asset to have join the research group. I’ve been able to work (& publish) semi-regularly with Juan Antonio while he was away, on lately during his various post.doc’s on modelling of jitter for wireless networks (e.g., “Optimization of jitter configuration for reactive route discovery in wireless mesh networks” and “Jitter Considerations in On-Demand Route Discovery for Mobile Ad Hoc Networks“) – but also as far back as during his PhD, on OSPF (e.g., “Mpr+ sp: Towards a unified mpr-based manet extension for ospf“). And, we’ve got a lot of rather exciting ideas to continue to explore, including some exciting new directions. It’ll be a lot of fun!

Since, apparently, bibliometrics and social networks rule the world, Juan Antonio’s academic and professional profiles are on:

The recruitment of Juan Antonio is in part funded by the Chaire Cisco, and will therein join my collaboration with the research engineers from the Cisco Paris Innovation and Research Laboratory. And we have some really exciting common research projects lined up (but that’ll be for several future blog postings). Not to mention all the cool things Juan Antonio will help us make happen, teaching-wise (but, that’ll also be for  future blog postings).

As an interesting aside: this recruitment of Juan Antonio seems to confirm a (very, very, very non-deliberate) tendency of my research group to be composed of no more than one person per nationality: we’ve got one American, one French, one Chinese, one Danish, one ….,  – and now, also one From Spain.

Either way: Welcome Juan Antonio! I’m sure that we’ll have a lot of highly productive fun.